This holiday season, wear the one button that is guaranteed to piss off all the liberals in your family and signal your unwavering support for Donald Trump—the greatest president in American history.

Join the I BELIEVE campaign to counter all the liberal bullshit spewing out of liberal socialist Democrats and their lying friends in the MSM who want to erase your vote in 2016 and impeach the president just because they lost the election they thought they’d rigged for Hillary. These rabid attack dogs just can’t stand a president that keeps his promises and gets things done.

Now, more than ever, Trump supporters can wear
THE ONE BUTTON THAT SAYS IT ALL!

A great button for any occasion. Small, yet, powerful. And for fun, hide it under a lapel and flip it over to flip off all the liberals at a party when their elitist bs gets too thick.

If you don’t believe The Washington Post, The New York Times, Airhead Liberal Pundits, Fake News from the MSM, Deep State Never-Trumpers, Fake Push Polls, Fake Investigations, Fake Impeachment Hearings, all the Lying Democrat Blowhards and the Socialist Anti-American “Squad”, then this is your chance to show people who you DO believe.

The I BELIEVE campaign is an easy, simple way for the “SILENT MAJORITY” to show their support for President Trump. A perfect gift for like-minded friends, and a great counterpunch to get under the skin of all the diehard socialist liberal elitists you can’t stand. It’s the gift that keeps on giving! 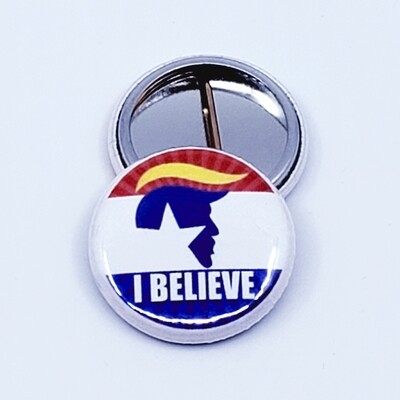